A practical and popular form of transport in Madrid are scooters. They are excellent to get quickly through the Madrid traffic. Furthermore you have no problems finding a parking space for your vehicle.
To rent a scooter one has to be 18 years old, posses a driver's license and show his identity card. For a deposit you can then rent a scooter. A Vespa costs about 40 € / day and is great for exploring the city quickly, easily and without traffic jam.

In Madrid, there are hardly any bicycles. One reason for this is that there are no separated bicycle paths and the main roads with its traffic are not suited for cyclist. Therefore, one should avoid the roads because of the traffic conditions. Cycling in the parks, however, is very popular.
A growing number of tourists and Madrileños accepts the challenge to discover the city during the sport on two wheels. It is undoubtedly the healthiest and cheapest way to discover Madrid. or to go to work or to class. Furthermore, the new »Anillo Verde Ciclista« (green-bicycle ring) means, that cyclists can catch sight of some exceptional views of Madrid around the city.

By man called the flagship project of the city, with a distance of 65 kilometres only designated to exclusive use of pedestrians and cyclists, the Anillo Verde Ciclista means that you can circle Madrid in some of the most beautiful areas of the city. The ring connects nine sports centres and 17 of the major parks in the city, including Retiro, La Casa de Campo, the Manzanares and Juan Carlos I. The latter also provides free bicycle rental, so you can explore every corner of this beautiful green area; along a well signposted route.

From the Green ring cyclists can marvel at the architectural features of the new cities (like Sanchinarro, Las Tablas, Montecarmelo and Las Rosas), residential areas with wide boulevards, sweeping avenues, green spaces. Cyclists can also get an insight into the new skyline of Madrid of the 21st Century, with buildings such as Cuatro Torres and the convention centre or the Caja Mágica near the Manzanares River Park, which offers a stage for large events. Without leaving the Manzanares River District and without getting off your bike, cyclists can also admire the new pedestrian and designer bridges, which protect cyclists against to grapple with the dangers of the motorways, which lead into and out of the city. The ring also allows cyclists to take advantage of one of the historical sections of the Manzanares, which was until recently not opened for traffic and which is limited by the A6, the M30 and the Franceses bridge.

In the metro there are special racks to carry bicycles into any part of the city. This service is available every weekend and on public holidays throughout the service times and during the week between 10.00 am and 12.30 pm and from 9.00 pm until the end of the service hours of the metro.

The majority of the Madrid Cercanías trains have special bike racks, so you can transport your bikes.

The bus number 33 goes from Príncipe Pío to Casa de Campo and has special bicycle racks that allows the transport of bicycles on weekends and public holidays. Folding bikes can also be taken on the bus, whilst the space is not needed for a wheelchair or a stroller and as long as there is enough space on the bus. The bike must be secured or held at all times on the bus. 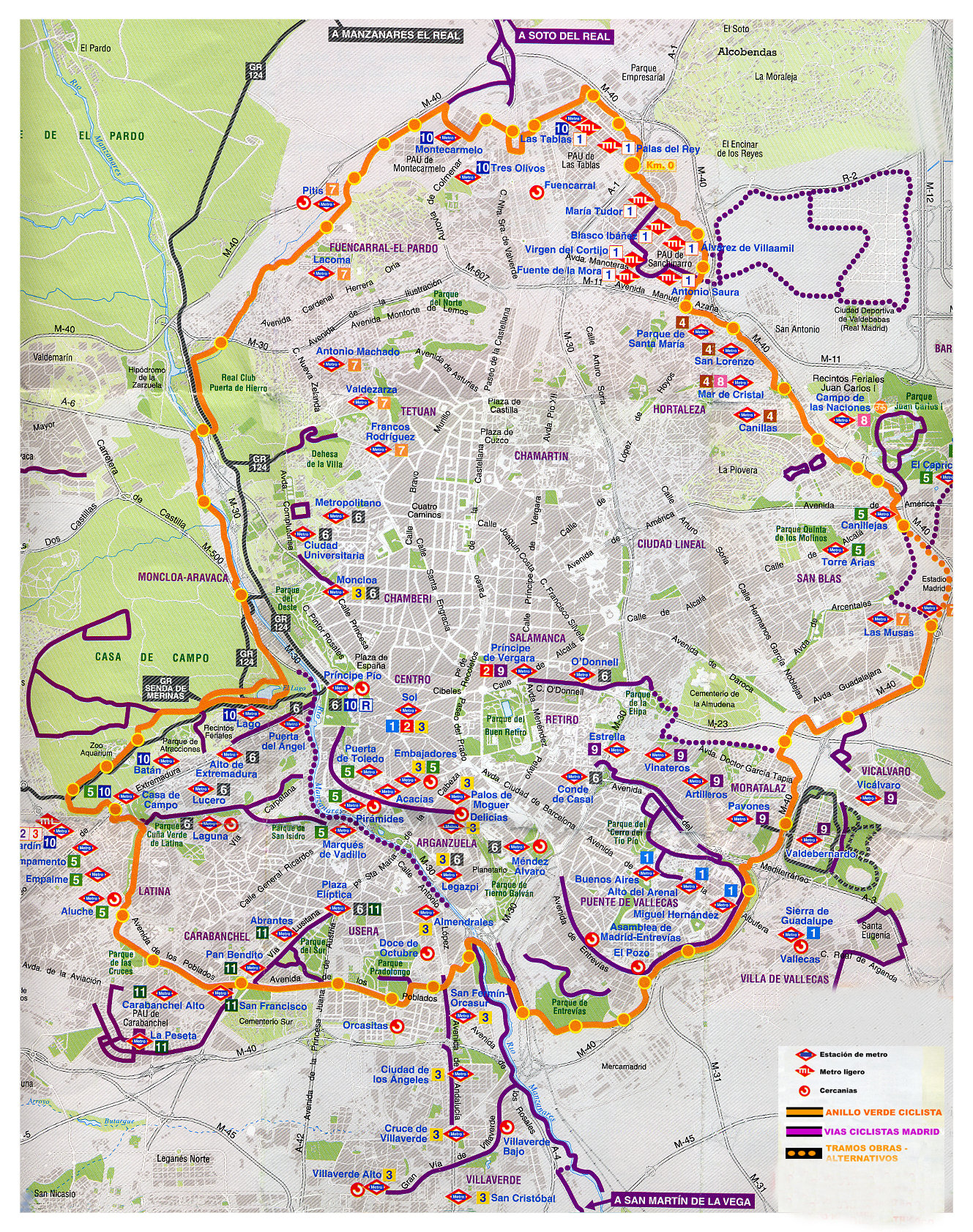